On August 8 I received an email from godan Kitty Gallagher asking whether I had heard from our mutual friend Mirta. Kitty was concerned by a post on Mirta’s Facebook page: “Dear Mirta, I will miss you, but you will always be in my heart.” I told Kitty I was pretty sure Mirta was just fine and that there had to be some benign explanation for this post.

I had just seen Mirta 5 weeks earlier on one of her visits to North Carolina. She had moved back to her native Chile in 2017 after retiring from a long and successful career as a scientist at Duke University. During that late-May get-together, Mirta had looked better than ever—relaxed, full of life and humor, her usual pretty, stylish, and boundlessly energetic self. She even mentioned that her supposedly irreversible retinitis pigmentosa seemed to be getting better, thanks to coconut oil, she claimed.

I called. No answer. I wrote. No answer. I reached out to one of her close Chilean friends in Chapel Hill and got the stunning news. Mirta had died of a heart attack on August 5. 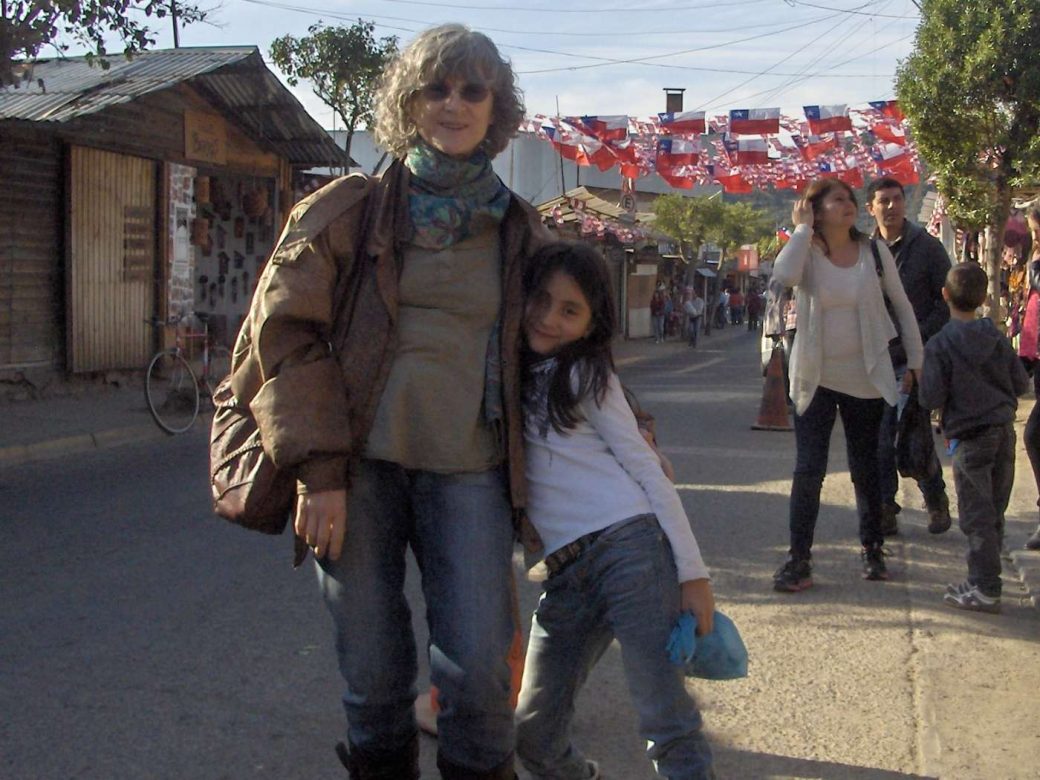 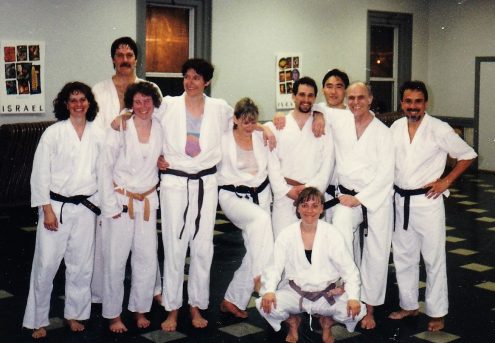 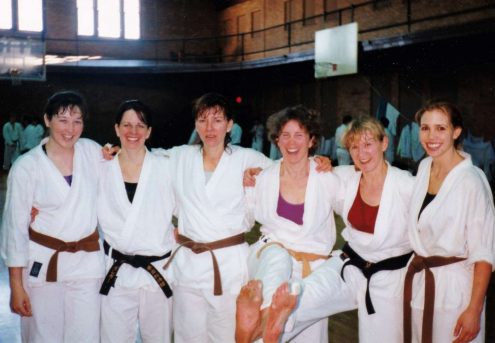 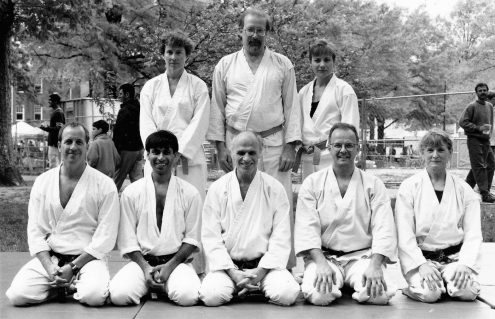 Mirta in 1998 at a street fair demonstration, front row right. 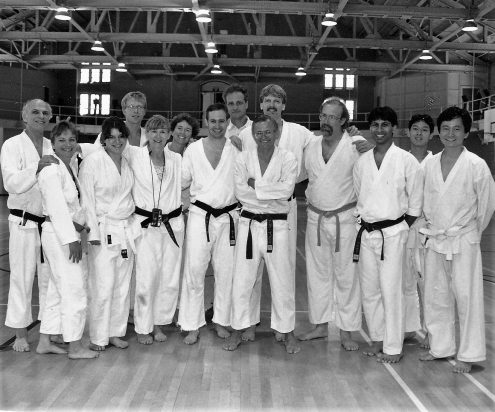 Mirta (5th from left with camera around her neck) at Spring in the South 1999.

Mirta Mihovilovic-Pavlov joined the Chapel Hill Shotokan Dojo in 1985 and immediately became a true karateka. Her endlessly inquisitive and subtle mind was strongly attracted to the challenges involved in Mr. Ohshima’s teaching of karate. Before long, she was a brown belt, then shodan, followed by nidan. She never missed a Special Training if she could help it. Surely she would have continued advancing had it not been for botched knee surgery and other orthopedic problems beyond her control. 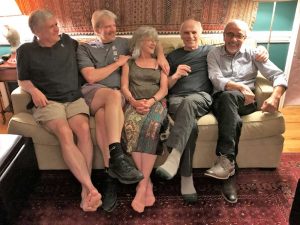 Mirta at a farewell party before she moved to Chile, September 2017 with SKA black belts Mike Ameen, Scott Swartzwelder, her senior and mentor Larry Lazarus, and Hugo Castillo. 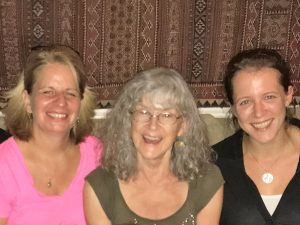 Her forced departure from karate practice was extremely painful for her. At first she didn’t even want to see any of her karate friends because we reminded her of what she had lost. But the bonds we had developed over the years were too strong and eventually her fellow karatekas were once again an important part of her extremely active social life.

Mirta had heart. In addition to her devotion to her own son, Rodrigo, she took an interest in the children of all of her friends, and those children adored Mirta (many parents this week dreaded having to deliver the news of Mirta’s passing to them). She was a good and generous friend, always anticipating the needs and desires of others.

Mirta had backbone. She was a woman of strong principles and, despite a demanding career, gave generously of her time to help bring reality in line with those principles. Her inability to compromise her principles is probably the main reason she had to leave Chile after the 1973 coup that toppled President Salvador Allende. The most concrete recent manifestation of this principled mentality was her service on the Town of Chapel Hill’s Transportation Advisory Board, where she fought for specific improvements to make public spaces accessible to all. Her latest battles involved advocating for lighting to help the visually impaired.

She also exhibited how strong a figurative backbone she had when her physical backbone gave out: she suffered a herniated disk in the middle of Special Training yet insisted on participating in the kibadachi practice, which she accomplished on crutches—certainly in a lot more pain than the rest of us.

Mirta had brains. Being a humanities-oriented person, I was often out of my depth when Mirta and my husband, neuroscientist Oleg Favorov (sandan), would start to talk about their work or science in general. I’ll let Mirta describe what she was up to at Duke in her own words: “I am a Senior Scientist currently involved in TOMM40 research investigating the influence that AD-associated TOMM40 polymorphisms may have upon mitochondrial function” (from a Duke Department of Neurology “Staff Spotlight”). She was also a voracious reader—literature, history, politics, science, she read and absorbed it all.

Mirta had a temper. (See above, “Mirta had backbone.” I’m pretty sure that many of her close friends suffered her wrath at one time or another—how could we live up to her standards?)

Mirta had energy. She was always productive at work, managed to regularly entertain (most weekends people would gather at her house and eat her fabulous cooking), exercised her amazingly green thumb both inside and outside her house, and found time for everything she felt was important (including keeping a well-organized dojo photo album, the source of several of the photographs accompanying this article).  I’m sure there are endless examples of this of which I’m not aware, but one I am aware of is her years-long effort to get her father’s novel From Afar Forever, based on the history of her family’s emigration from Croatia to Chile, translated and published in English.

Mirta had taste. She dressed and decorated her home with style and flare. Her walls held the original works of several SKA artists: Duane Keiser, Ray Berry, Mike Lyon, and our own senior Larry Lazarus.

Mirta never complained. She had chronic knee pain, back pain, cancer that almost took her life a decade ago, and she was going gradually blind from retinitis pigmentosa. If she were still alive she would certainly scold me for this paragraph. Why would anyone need to know these unimportant details?  She was always cheerfully positive, always spreading sunshine.   The Stoics would certainly have found a kindred spirit in her. 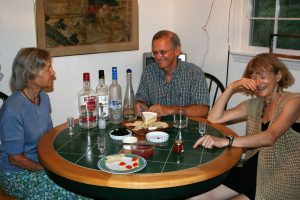 Enjoying vodka therapy with Oleg Favorov and his mother in 2007.

Rightly or wrongly, she was convinced that she would not have gotten cancer had she been able to continue practicing karate. She also claimed that Oleg and I saved her life with the weekly “vodka therapy” sessions we administered the first few months after her cancer diagnosis—miniscule vodka shots accompanied by numerous toasts to her health. 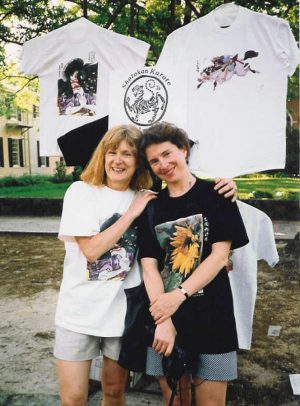 Mirta and Nora selling T-shirts at a Chapel Hill street fair in 1998.

Mirta remained devoted to SKA even after she stopped practicing. Every Spring in the South she was there helping sell T-shirts or looking after the children of Kitty Gallagher and her husband Laurence Libelo (nidan) so they could practice. It is a tribute to Don DePree’s unselfish humanitarianism (a side of him few people are aware of) that throughout Mirta’s battle with cancer they maintained a regular correspondence and he showed great supportiveness.  She was devastated by his loss.

Sometimes the candles that burn the brightest extinguish the earliest.